A Mom Stood Up To A Teacher About “Earned” Bathroom Privileges 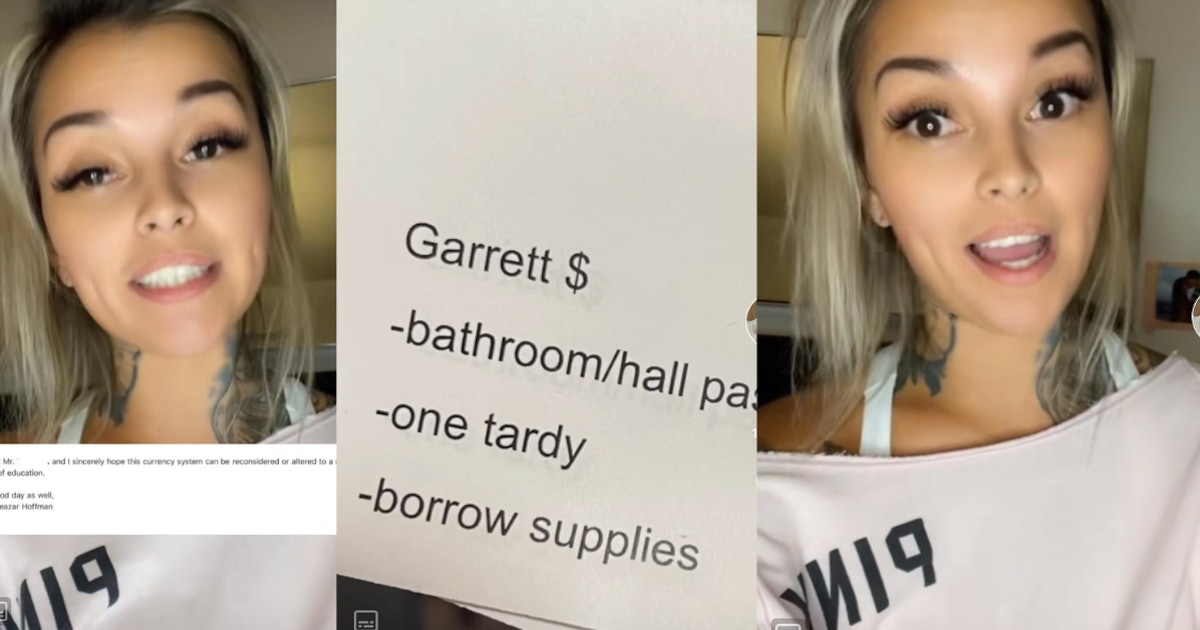 
Reward systems and incentives are one of the oldest and most effective ways teachers can help kids learn responsibility, follow rules, and gain a sense of what it means to earn. But what happens when the reward a student is trying to earn should be a basic human right as well as a bodily function you have little control over?

One mom posted on TikTok venting about her daughter’s teacher and the very questionable incentive plan she uses in her 6th grade classroom. Desi Eleazar Hoffman (@mommastattoos) said the girl’s teacher, Mrs. Garrett, has allegedly implemented a classroom “reward system” that allows students to earn “Garrett dollars.” Those dollars can then be used to borrow supplies, make up for a tardy, or use the bathroom. Yeah, that last one is where this mom had an issue. Rightfully so.

Since posting about her issues with the system, Hoffman’s TikTok has amassed over 1.5 million views and thousands of comments from viewers.

In her video, Hoffman explains the system, including the fact that students can allegedly earn “Garrett dollars” in various ways, including donating classroom supplies.

Hoffman pointed out that children should be able to use the bathroom whenever they want instead of having to earn that privilege — and also that in sixth grade, girls are just starting to navigate their periods and require extra trips to the bathroom.

Taking measures into her own hands, she e-mailed her daughter’s teacher, letting Mrs. Garrett know that her daughter will be using the bathroom whenever she wants. However, the response she got back was not exactly a resolution. In fact, it made things worse and shed light on an entirely new issue with the “Garret dollar” system.

In a follow-up video, Hoffman said she learned that students can use the bathroom without the dollars; however, by doing this, they’ll lose “table points,” which means the teacher takes away points (used to buy prizes) from other students.

“She seats us all at tables and teams, and if somebody does something bad … she docks points from the whole table, and everyone at the table gets so mad at you,” Hoffman said, imitating her daughter.

She then goes on to retell a story her daughter told about a boy who got “booed” by the whole class because he had to have “table points” docked. Her daughter explained that she’d rather hold her bladder than be humiliated by the entire class.

Hoffman explained that it’s not about the system but rather that bathroom privileges are a part of that system. “Keep your super great reward system, and just let the kids use the bathroom free of charge.”

“He did thank me for bringing it to his attention,” Hoffman said in a follow up TikTok. “and that it raised awareness on the situation.”

As for the “table point” issue, in which Hoffman finds it “absurd/illogical to pit students against each other in order to impose social accountability” — that is still in limbo. “That [issue], I might have to take to the board still and show them the evidence that punishment is an outdated method.”

This mom really went above and beyond for her daughter (and every kid in that class) to get them the classroom experience they deserve.

She closed one of her videos with a valuable lesson, and said, “It’s not about who is right, it’s about what’s right.”