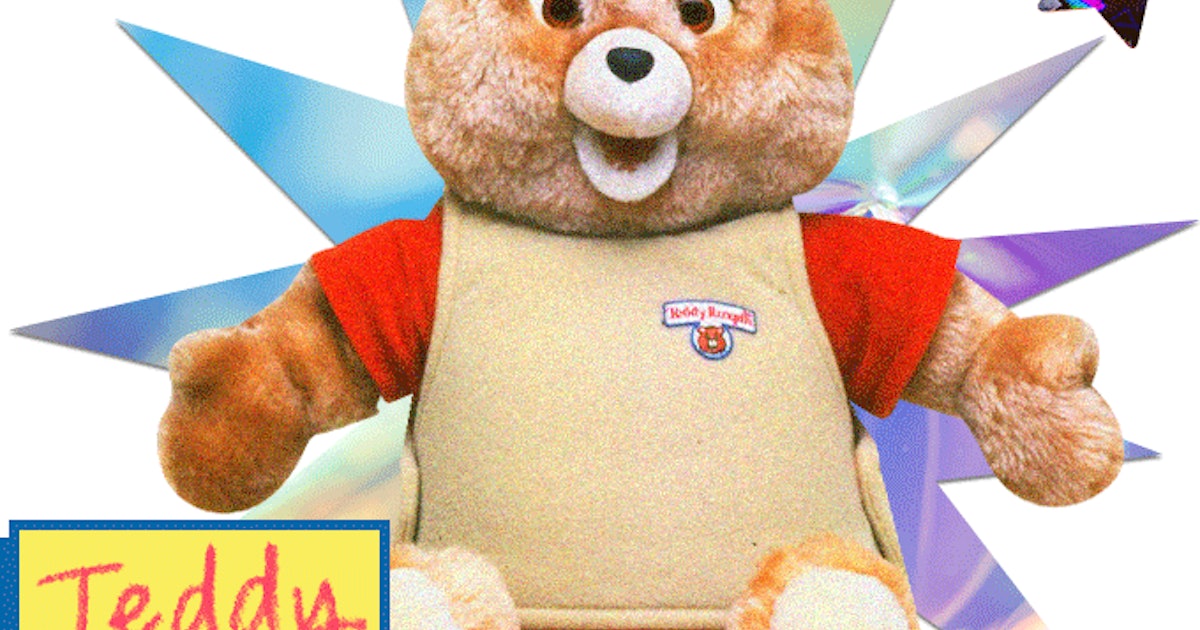 
Geriatric millennials (sorry) spent their childhoods coveting everything from Barbie dolls to Teddy Ruxpins. We loved them; we had to have them. So, because we’re nostalgic like that, we wanted to take a look back at some of our most beloved, extremely popular ‘80s and ‘90s toys and explore why we obsessed over them and where they are now. We turned to veteran toy expert Jessica Hartshorn, who has spent her career writing about all things parenting and toys, to do her due diligence and get to the bottom of some of our most-wished-for favorites. Behold, Scary Mommy’s nostalgia & toys extravaganza. All week, we’ll be looking at the toys that made us. You’re welcome.

Long before impatient Hatchimals asked you to bust them out of their egg and Fingerlings fell asleep on your fingers, there was Teddy Ruxpin, the very forefront of technology when it came to ’80s toys. You put a cassette tape in Teddy’s back, and he talked, his mouth opening and closing and his eyes blinking. (See the original commercial that had every kid wanting to bring Teddy in for Show and Tell.)

All the commotion around Teddy was that he was the least-clunky, most-affordable animatronic toy at the time. But I think what really appealed was that he told stories that kids could follow. He didn’t just cry or say a few words; he communicated and kept kids engaged. Teddy ultimately led to today’s more sophisticated story machines like Toniebox.

Why does Ruxpin remind me of Disney?

As an ardent and lifelong Disneyphile, I thought, even as a child, that Teddy Ruxpin bore a strong resemblance to the Country Bear Jamboree characters. Back in the ’80s, that stage show was a major feature of Magic Kingdom, and Disney World was only half the size of what it is now. Well, it turns out that the Teddy Ruxpin inventor had worked at Disney and had Disney connections, so that all makes sense to me now. Apparently, Ken Forsse’s Teddy Ruxpin was inspired by Disney, Chuck E. Cheese, Atari, and a bunch of other childhood touchstones like Winnie the Pooh.

And like tickets to Disney, Teddy Ruxpin was always pricey. It cost parents $70. Adjusted for inflation, that would be about $190 today. Cassette tapes to make him tell stories were an expense on top of that. I’ll admit that I did not get a Teddy Ruxpin myself because, in 1985, Santa brought me this cool Swatch watch which was probably more like $50. It’s fine. I already had my Cabbage Patch doll.

Why is Teddy Ruxpin a little bit terrifying?

Along with clowns, toys that seem to come alive are a fixture in our nightmares. Which begs the question: Why do toy manufacturers want to make toys seem more and more real? There were at least five talking toys that were hot for last year’s holiday season.

And yes, Teddy is terrifying to some. The 2017 reboot had glowing, animated eyes to add a little more discomfort. Maybe there is some fine line between “talking friend” and “potential killer” that appeals to kids. Just watch the commercial to see what I mean.

My teen, who studies theater, introduced me to the idea of Uncanny Valley. Reading about it, I started to understand: Our brains can’t empathize with something that seems human but is obviously not actually human. We can be comfortable with talking toys up to a point, and then we get creeped out. It’s science.

How come Teddy Ruxpin didn’t have the staying power of, say, My Little Ponies?

My Little Ponies, the Smurfs, and Care Bears were all gangs of characters. Teddy Ruxpin starred in his own story, with a few friends around. His best friend was Grubby. An octopede, a bug. Enough said.

That was a lot of pressure to put on one figure who, let’s face it, didn’t have all that much personality. (Sorry, Ruxpin!) And I think a fatal mistake was turning Teddy Ruxpin into a spokesanimal for all things safety. Fire safety, water safety — somehow Teddy got involved in all of that, and it became a buzzkill. Watching the ponies squabble and make up is a lot more amusing.

Finally… Teddy was not a bear. Maybe to avoid being accused of completely ripping off the Country Bear Jamboree bears, Ruxpin was explained, via elaborate backstory, as an “Illiop.” That’s a creature who looks like a bear in every way but is an Illiop. I’m not kidding. How is that appealing to kids?

If this leaves you with more questions than answers, I like this 11-minute review of the rise, fall, and semi-rise again of Teddy Ruxpin.

Where is Teddy Ruxpin today?

Some Teddy Ruxpin history courtesy of Wikipedia: The company behind Teddy did not survive the stock market crash of 1987 and declared bankruptcy in 1988. Hasbro made the toy in the ’90s. In 2006, a new version came out from BackPack Toys, capitalizing on nostalgia for ’80s toys. And most recently, Wicked Cool Toys made a modern Teddy Ruxpin that works via app.

Here in 2022, there aren’t a lot of kids clamoring for a Teddy Ruxpin. More likely, your kids want to walk the Walmart toy aisles for Furreal Friends and Little Live Pets. (I got the Little Live Pets pig for my niece’s birthday last week.) Those are mostly under $40, with plenty of things in the $10 range if what you’re looking for is a lifelike but silly toy animal.

And if what your kid wants is storytelling, which in my opinion is what Teddy Ruxpin was really at the forefront of, there’s the $110 Toniebox or the $28 Leapfrog On-the-Go Story Pal picking up that play pattern. Spotify Kids will play kids’ audiobooks, too. And with any of those, there are no creepy, blinking eyes.