Dad Gets Shamed For Leashing His 5-Year-Old Quintuplets 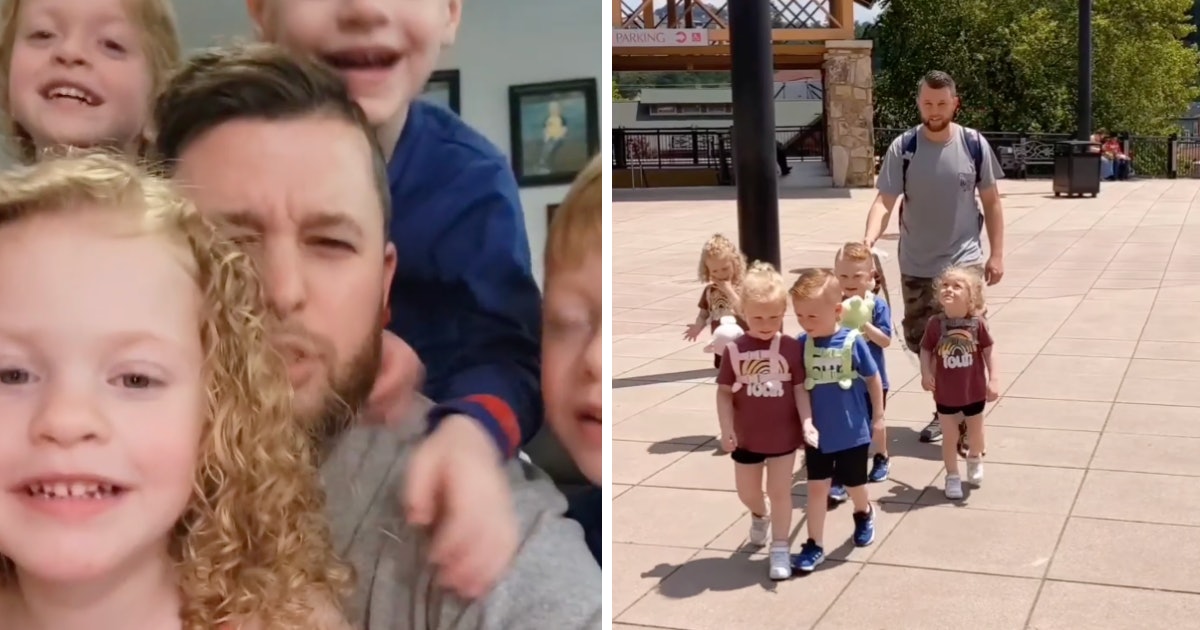 
Shaming a parent for their choices is basically always wrong if the kids in question are safe and cared for. But this one is a little bit tempting.

Instagram dad Jordan Driskell, father of five-year-old quintuplets, God bless him, posted a video of himself out “walking” his herd of children on leashes and went viral for his choice of child transportation.

“Come walk a mile in my shoes,” he captions — while Doja Cat sings in the background, “You ain’t nothing but a dog, playa.”

More: So You Think Your Kid Needs A Leash Backpack

Now, the video has over 3 million views and basically every keyboard warrior out there has added their personal opinion on using child leashes, multiples, and child rearing in the comments section.

Many of the comments were… unkind.

“They are humans, not dogs,” was a common refrain.

“Those kids are way too old to be walked on a leash,” another said.

“Are they rescues?” another asked.

A fellow dad of quintuplets, though, was more understanding and empathetic: “Never used a leash, but have pulled out the preschool rope with the multicolored loops for them to hold onto in a line for a few specific places. I don’t have boys though…. That adds a whole new challenge that i haven’t had to deal with😂”

Other parents also understood — pointing out that they can’t judge since they’ve never had to wrangle five five year olds and that safety should come before all other concerns.

“i’d rather kids on a leash that a damn amber alert,” one said.

Driskell doubled down with another video — captioned with, “Just a dad taking his pet sperm for a walk. Mind ya business ppls.”

The 31-year-old dad of five also came to his own defense on Today Parents.

“Kids are so curious — they want to run off and explore,” he said. “For our own peace of mind and sanity, we use a leash. It also allows us to leave the house and do fun stuff as a family without being stressed.”

More: Yes, I Leash My Kids And It’s None Of Your Business

He also explained a a six-seater stroller was too much for them to handle.

“It was just too bulky and ridiculous to take anywhere,” he said. “The other thing is, they want to walk when we go somewhere crowded. A leash gives them the opportunity to do that — but we’re still in control. They love it.”

Driskell often shares his parenting experience on social media, albeit with less controversy.

There’s been little research on child leash backpacks and harnesses, either regarding their effectiveness or the effect they have on kids.

Most experts can agree that they are pretty safe; there haven’t been any recalls or reported serious injuries. But some pediatricians don’t recommend them.

“We don’t have data on injuries associated with the leashes, but we also lack information about why parents use them, and what any benefit might be,” says Benjamin Hoffman, M.D., F.A.A.P., chair of the injury prevention council at the American Academy of Pediatrics (AAP), told Good Housekeeping. “I’ve personally witnessed parents pull back forcefully on a leash, resulting in a fall, often backwards,” Dr. Hoffman says. “I worry about injuries to head and limbs in that scenario. As a pediatrician, I would never recommend them. I would rather see a child in a stroller than on a leash.”

But doctors have varying opinions, and one pointed out that it can be a great option for neurodiverse kids.

“This is creative problem solving. This isn’t treating kids like animals,” Parenting and youth development expert Dr. Deborah Gilboa told Today. “The alternative would be just staying at home. It’s a great system for a parent with a neurodiverse child or a child who hasn’t nailed all their listening skills,” she explained. “Ninety-nine point nine-nine percent of moms and dads want what’s best for their kids and they’re doing it to solve a problem. Just because you can’t identify the problem, doesn’t mean it’s not there.”

The bottom line seems to be the same as it ever was: If it’s not your kid, and if you don’t know their story, it’s always best not to judge. If everyone is safe and healthy, it’s a great time to hold your tongue.