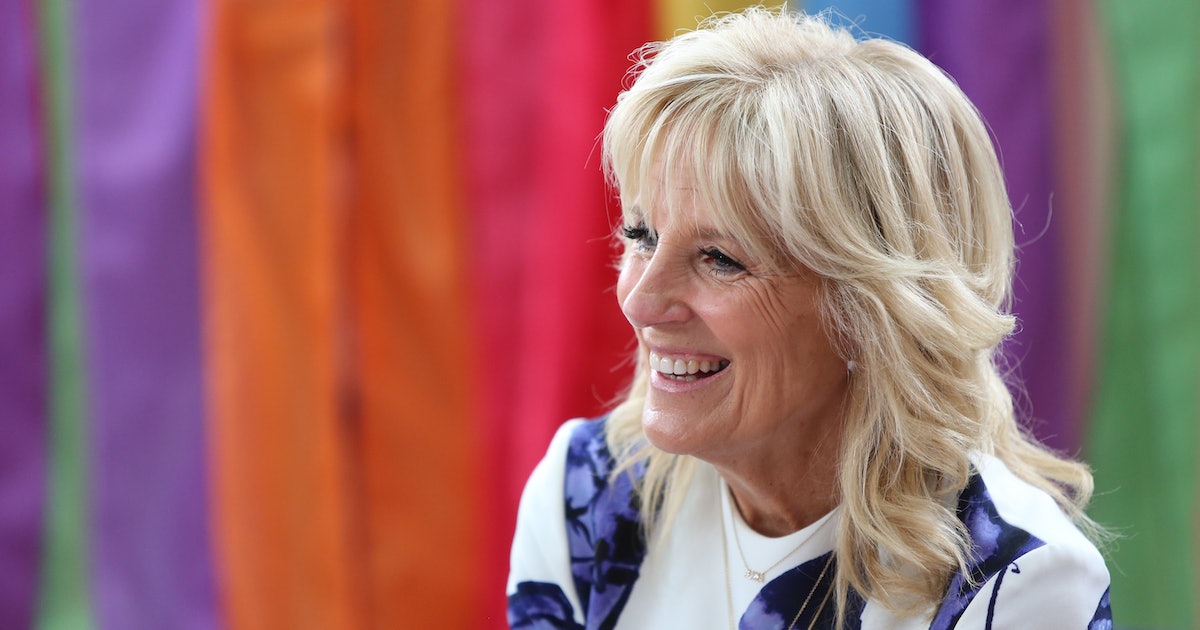 She recently sat down with the Editor-In-Chief of Real Simple, Lauren Iannotti, to answer the question that’s on everyone’s minds: How the hell does she do it all? Her answer? She’s found ways to work smarter, not harder. The whole interview is worth a read, but one moment that deserves its own moment is her secret weapon when it comes to managing the mental load of running a household: Post-Its. When asked how she delegates, Biden shared that she finds using Post-It notes makes assigning tasks to other people in the house much more manageable.

“It started because the Bidens are a big family, and we have a lot of gatherings. And they would all say, ‘What can I do to help?’ And by the time you’ve explained, ‘You get the salad bowl out, it’s in this cupboard, here are the utensils, etc.’ I thought, ‘There’s got to be an easier way.’ I know my meal, and what I’m going to serve, so I do Post-it notes, like, ‘Fill the glasses with ice,’ ‘Light the candles,’ and I put them on the cabinet above my kitchen counter. Then I put out the salad bowl with the tomatoes or the lemons or whatever needs to be cut, and everything is set up so when somebody comes in, they do what they want to do,” she explained.

Biden continued, saying that her kids will “pick whatever one they want, and they really like that because they’re helping, but they’re doing what they chose to do. And nobody’s asking, ‘What shape do you want the lemons?’ Everybody knows their role. If we get together, it’s at least 13 or 14 and can go up to 30. So I do that for almost every big family dinner now. I do the main. Everything else is up for grabs.”

If you’re wondering if the Post-It trick has made it into her professional schedule, the answer is yes, but they’re personal reminders. She shares: “I do, but then they’re for me! They’re telling me what to do. And if I want to get a message to Joe, I put one on his mirror. It may be a nice ‘I missed you’ or ‘I hope you get whatever it is you’re working on.’”

While Jill Biden is obviously a bionic multitasker, she admits she refrains from using the terms “juggling” or “balancing” and prefers to use “managing,” explaining that, “You can’t do anything in a haphazard way. You have to have purpose while you’re doing it, and it has to be organized. That’s the key to it.”

She returned to the classroom as a full-time teacher in September 2021, teaching two days a week at Northern Virginia Community College, an institution she’s been working at since 2009. Looking back on her decision to keep her day job, “Dr. B” recounted, “I think people were a little skeptical. Could I truly do it since I was the first one to try it? But I knew I wanted to teach. And so I said, ‘This is what I want to do. We have to figure it out.’ I knew I could do both. I’d done it as second lady, and at that time, my staff said, ‘There’s no way you can do this,’ and then they saw that I could. I saw it work then, and I knew we could figure out how to do it now.”

When asked if she ever feels the guilt or pressure many experience from wearing so many hats, the first lady proclaimed, “Of course!” she is no different from the rest of us busy moms, sharing, “Especially when you have kids, right? You’re always thinking, “Did I spend enough time at his game?” Or, “Should I have said that?” You’re always questioning yourself because you want to be the best mother you can be, the best teacher you can be. You’re thinking, “Did I give that student enough attention?” I think it’s just part of human nature. You want to make sure you do a good job at anything you do.

Of course, Jill Biden does not think that the country’s issues with burned-out parents and overworked, stressed moms will be solved with a few sticky notes. Oh nope. While notes and organization help keep her life in check, she thinks that the United States won’t have healthy parents until there’s systematic change.

“We should be passing childcare laws and universal pre-K,” she said in the interview. “I’m a big believer in early childhood education, and Joe is too. Don’t forget he was a single parent. His first wife died in a car accident with his daughter, and he was a single parent to two boys for five years. He knows how hard it is. He was a Senator, and he had his mother helping him out, but there were the parent-teacher conferences, the games, his job. So I think that helped him understand what working parents, not just working moms, need. He keeps pushing it, but Congress has got to step up. The House passed the subsidized childcare and his universal pre-K bills, but the Senate did not.”

Yet another reason to look up your Senators’ voting history and get rid of anyone not stepping up for parents. Thanks for the reminder, Jill. Putting it on a Post-It now.