It’s My Kid’s Last Summer At Home, And I Just Can’t Stay Mad 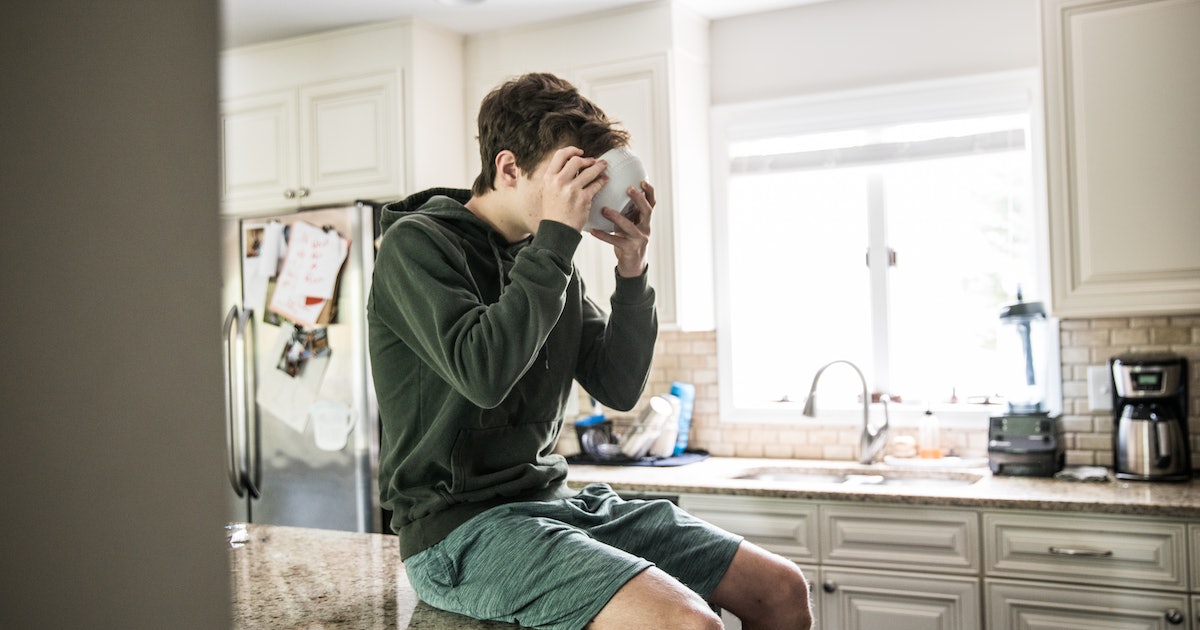 
The popsicle wrappers were what did it. I returned home from work one afternoon, tired and irritable after a scorching hour-long commute, and there were two empty popsicle bags waiting for me on the table in the entrance hallway. You know the kind — long, clear tubes filled with flavored water, brightly colored to correspond with their intended flavor. I shouted for my son, who was home from college for the summer, to come collect them. I got no answer, so I slipped off my shoes, put down my keys, and carried the wrappers into the kitchen to throw away myself.

I’ve been picking up those empty popsicle wrappers for 20 years. Under the couch, on the table, on the porch, the car floorboard, under carseats and in gym bags, breakfast, lunch, dinner, they have been an undeniable sign of summer in our house for decades.

This summer is no exception. My 21-year-old son is coaching a city-league swim team and drifts home for lunch break most days, and eats what appears to be a half a dozen popsicles. Some of those wrappers make it to the bin, and some don’t. I’ve never thought about it much in summers past; we pick up after each other frequently, and I don’t mind. But this summer, it feels a little different. He’s entering his junior year of college this fall, and it’s highly unlikely he’ll live at home again next summer. Or the next. So what, then? This is…it? Photo internships and newspaper assignments will seduce him away? His little room (which doubles as my office when he’s gone) will stay empty?

I have gotten used to the semester absences. My diet changed completely the first semester he was off to the dorm: suddenly freed from the obligation to cook dinner regularly, I subsisted on olives and Icelandic yogurt for days on end. My husband and I now slowly drink coffee in our underwear in the mornings. Laundry is done at a much, much slower pace, fresh bath towel supply stacks last longer; there’s generally a calmer, much less chaotic feel in the air.

That said, breaks are a wonderful chance to reconnect, make a few meatloafs, nostalgically wash and fold his laundry, and work the old mom gig for a few weeks. Now I’m facing the end of those periodic intervals, and as much as I thought I was… I’m not ready.

My husband came grumbling out of the bathroom a couple weeks ago, complaining that — despite a recent laundry day — there were no clean towels. He was right, and the dirty ones were all in my son’s room. It’s annoying, yes, especially when one of us has to have the “hey don’t hoard the damn towels” conversation again (and again). His Vans are always in the hallway, his gym and work bags linger on the table, his camera gear is strewn about. It looks suspiciously like a college dorm at times, and yes, it is frustrating.

But somehow, this year, this summer, I can’t find it in myself to be quite as cross about it all. This is it. All the years I have groaned about dirty towels and scattered shoes, loud video game campaigns and, yes, popsicle wrappers are about to hit a brand new stop. In a few weeks, when we load up his car and my Subaru to move him back to the dorms, he won’t come back. Sure, he’ll be back for the holidays or a weekend, but these long, slow, reliable summers — pool towels on the front porch, family meals on the back porch, and enthusiastic all-the-grocery-bags-at-once carrying — are coming to a close that I never anticipated.

He’s an adult. A young one, but he is, in fact, an adult. It’s healthy and good that he’s ready (is he? gods, I hope so) for the apron strings to be cut. It will be good for him. He needs to stretch his legs, see things, problem solve — all of the things I know come in organic order for young people. But when I think about the usual summer move-back-in not happening next year, these long summer nights being quieter, migrating back to sustenance of olives and yogurt again, I can’t help but feel overwhelmed by the bittersweetness of it.

Those legs he needs to stretch — is going to stretch — are still, in my mind, dangling beneath Thomas the Tank Engine pajamas, bruised and band-aided, eating a popsicle in the cooled-off evening before bed.

Tomorrow, when I come home and invariably those popsicle wrappers pepper the house, maybe I’ll leave them a little longer.

Katherine Mueller is a freelance writer living in central Kentucky with her husband, in-and-out college student son, and part-time step-sons. When she’s not working, writing, or napping, she travels with said husband, and talks to her two cats like they are humans. An invested community builder and volunteer, she subscribes to a “we all do better when we all do better” mantra. She also enjoys canceling plans in lieu of a good under-eye mask and binging The Office from bed.