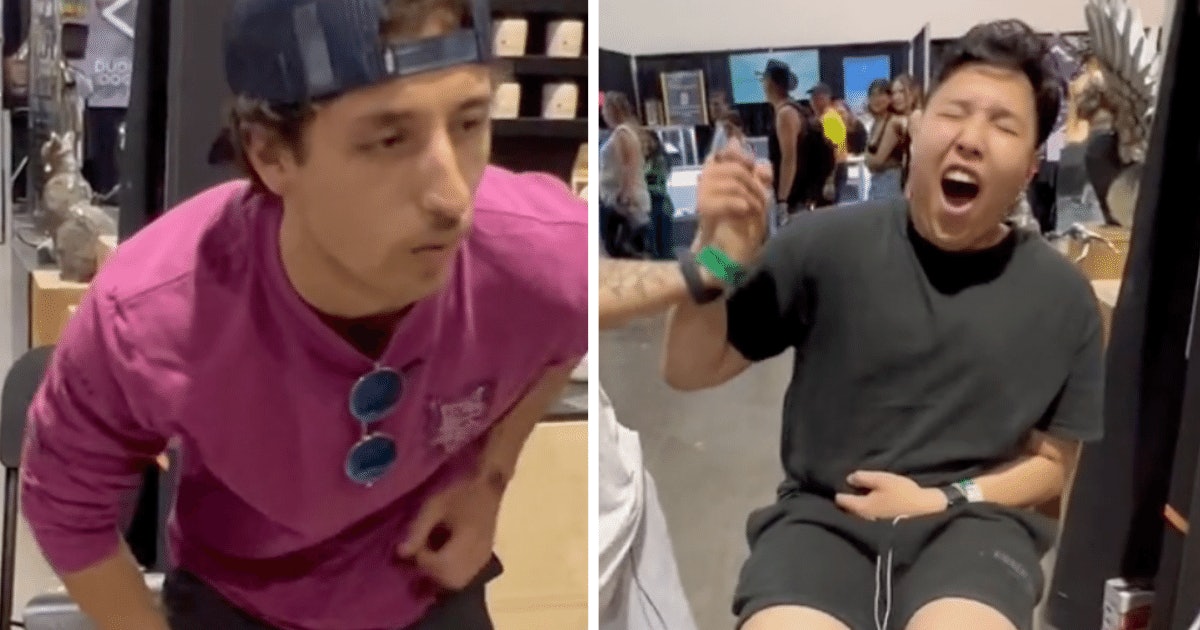 
It’s often hard to explain to a partner or a man in your life how it feels to experience period pain and cramping. And considering the prevalence of the Man Cold, it’s also hard to imagine how people who have never had uteruses would handle the monthly side effects of menstrual cycles, which can literally hurt as badly as a heart attack.

Period relief company somedays, which sells pain relief products like flaxseed heat pads, clay baths, and cramp cream, wanted to find a way to definitely show that period pain is not normal — and that it’s no small matter.

The result is a period pain simulator that works by sending electrical impulses to the brain that make the muscles in your lower abdomen and thighs contract in waves very similar to a period or early stage labor. Ouch.

They took their brand new period pain machine to the Calgary Stampede — a very large rodeo — to test out how rough and tumble cowboys would handle a visit from Aunt Flow.

The results have been hilarious, and have tallied millions of views on TikTok.

“How can you function like this!?” asks one man, who hasn’t even had the dial turned up to a level of everyday period pain.

“We wanted to figure out a way to effectively break down social barriers to open and honest conversations about periods,” CEO and co-founder Lux Perry told Scary Mommy. “Often people are uncomfortable talking about periods and period pain in public, so we were focused on finding a way to include everybody in the conversation in a funny and lighthearted way. We thought a period simulator to show men what we feel would do exactly that.”

And if you think that it’s overblown they have women try it out just to test accuracy.

“This is so cool; this actually feels legit,” one woman says — very calmly — at a level 6.

She makes it to a 10 with ease. “It hurts but…” she trails off and shrugs nonchalantly.

Some of the most revealing videos are when a man and a woman try the simulator at the same time.

“I’m going to go to a Level 7 for her,” he says about his partner, before clutching his abdomen in pain. “How do you do things!?”

“You can literally see the empathy growing,” somedays captions the video.

“The response has been overwhelming,” says Perry. “We’ve had hundreds of thousands of women commenting about how validated they feel and how much joy it brings them for people to finally understand the pain that they endure every month. We’ve also had numerous men come forward to say, ‘I had no idea,’ and genuinely engage in an empathetic and supportive conversation that has been so moving to witness and be a part of.”

It’s true: the videos are a combination of hilarious and validating.

“We think the work we’re doing at somedays is so important because people with period pain are consistently invalidated and dismissed in every aspect of their lives, whether that’s at the doctor’s office, in school, at work, or in our own homes by the people who are supposed to support us,” Perry tells Scary Mommy. “By opening up the conversation and creating the space for so many people to come forward and share their struggles, we’re changing the narrative from, ‘period pain can’t be that bad’ to ‘period pain is not normal’, and people struggling with it deserve our care and support.”

Now, as one commenter asks, how can me make trying this machine mandatory for all people with male body parts?