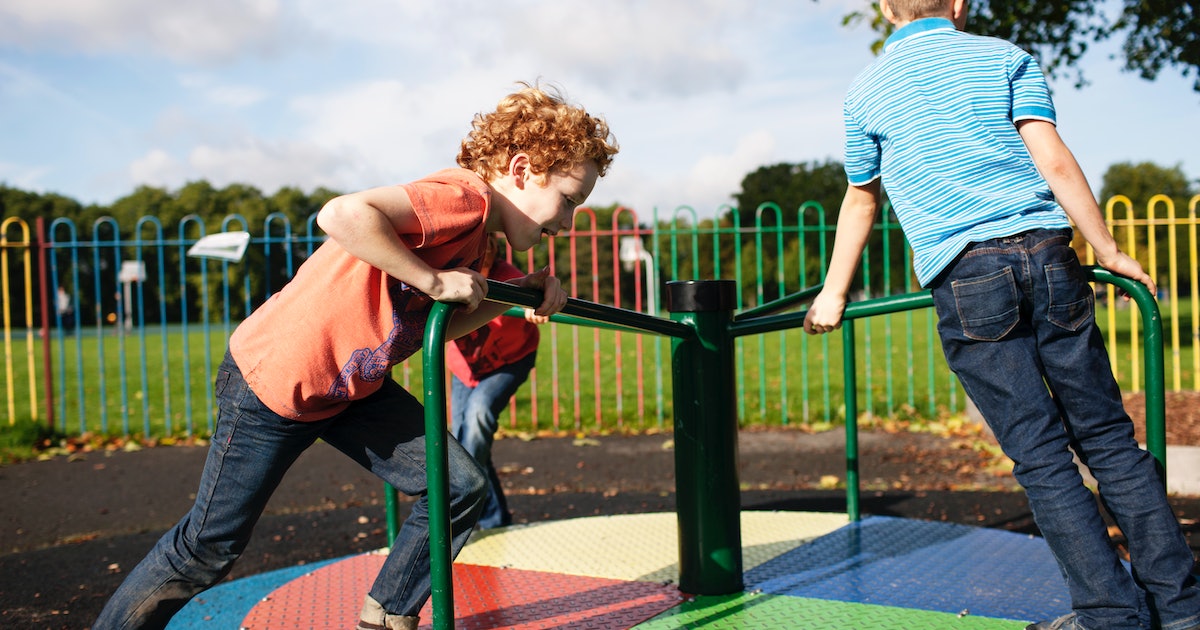 
It’s a familiar scene, standing at the playground with a friend, attempting to catch up while scanning the area doing quick safety checks on our kids. Everything is calm, until the inevitable happens: a small disagreement over a game of tag between our seven-year-old sons quickly escalates into a battle royale. We watch as hands start to flail in the air and voices get loud, ultimately requiring our intervention. They’re both heated and annoyed, yelling angrily at one another. But we’re even more frustrated than them. Because it’s wildly aggravating and difficult being great friends whose kids can’t get along.

This isn’t an issue unique to one particular friend, actually. Each of my children is a unique blend of social, sensitive, and opinionated, and so in a lot of gatherings or groups, at least one of mine is feeling mildly pissed off or annoyed with somebody else’s behavior. And while it is easy to quietly nudge them away from frustrating strangers on the playground, it is a little trickier when their adversary belongs to your good friend.

So when a friend and I are mid-convo and our four-year-old daughters start dismantling Barbies in an angry tug-of-war for their favorites, it can be a challenge to navigate, for both parties. Both of us wants to offer our child protection and validation while also holding them appropriately accountable. I personally tend to err on the side of blame with my own kids. It feels safer and less problematic — but it actually probably isn’t always fair to them. It just feels so hard and fragile in the moment, to make sure you are a good friend and a good mom at the same time.

I’m careful because I have seen friendships sour over seemingly small disagreements between people’s kids. Sometimes they end because the incompatibility is too difficult for the child, but often it’s because it’s too difficult for the parent. Walking the tightrope of policing these kid battles in a way that feels authentic to you and respectful of your friend, depending who she is, can be very tricky. [cut: And because our current world often feels stressful enough, navigating this friendship minefield is kind of more than I usually want to take on in any given afternoon.]

But I don’t think everyone agrees. I so often see moms who are very close friends, parenting in groups acting interchangeable parental roles, each of them totally comfortable policing the behaviors of one another’s kids, no one seemingly offended or upset when their child is obviously reprimanded. And the kids don’t seem to mind, either — all unaffected by the continuous change of guard.

Well, I am not that cool. In fact, I feel pretty uncomfortable when other adults scold my kids when my husband and I are around. Of course I understand in dangerous situations or ones that need quick attention, but generally speaking, I prefer that the parenting be left to us. It’s not because I can’t see when my own kids are at fault, as I am usually acutely aware of their shortcomings. It’s just a mama bear instinct that fires through my veins in these moments, despite my best efforts to be chill.

So even though I tread very lightly when conflicts between my kids and my friends’ kids arise, it still feels stressful. It is delicate and difficult and can take some of the enjoyment out of otherwise fun gatherings.

But it can also bring you and a friend closer, if maneuvered correctly. Because when you realize that you and your friend handle these situations similarly, in a way that feels respectful and comfortable for both parties, it can deepen your connection. Knowing that conflicts will be handled similarly, allows for a level of relaxation during hangouts that is so necessary [cut: especially in the current world climate]. And that, is amazing.

Samm D. is an ex-lawyer and mom of four who swears a lot.