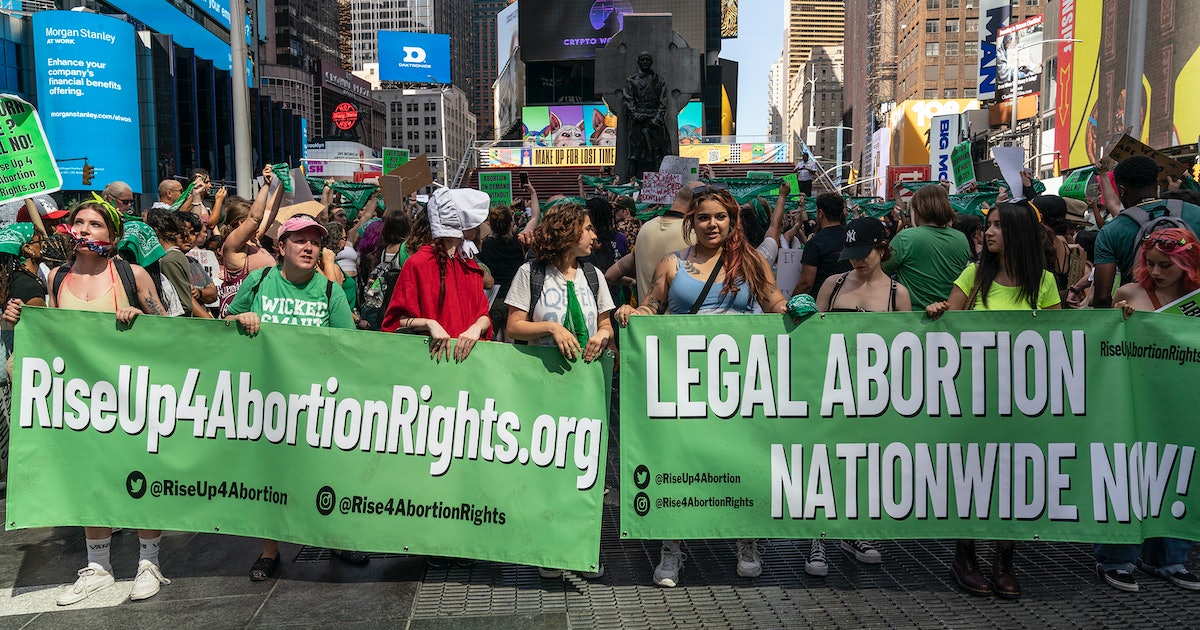 
The White House has been clear about its disapproval of the Supreme Court’s decision to overturn Roe v. Wade and end the constitutional right to abortion in the United States. But with SCOTUS stacked with conservative justices, and a razor-slim Democratic majority in the Senate vulnerable to the filibuster, people living in states where abortion is now, or soon will be, illegal, aren’t expecting help from the government anytime soon.

Yet, in a show of support, President Joe Biden signed an executive order on Friday, protecting abortion access for all those who will need to cross state lines to access care. Speaking alongside Vice President Kamala Harris and Health and Human Services Secretary Xavier Becerra, Biden called the court’s June 24 decision “so totally wrong” and urged women, specifically, to show up and vote for lawmakers who will pass abortion rights legislation this November.

“This isn’t some imagined horror,” he said. “It is already happening. Just last week, it was reported that a 10-year-old girl was a rape victim — 10 years old — and she was forced to have to travel out of state to Indiana to seek to terminate the pregnancy and maybe save her life.”

The executive order calls for the protection of mobile clinics near the borders of states that restrict abortion access and the provision of legal help to people traveling between states to get an abortion. Less immediate actionable directives in the order include establishing a task force on reproductive health care; calling for a report from Health and Human Services outlining ways to improve access to abortion medications, emergency healthcare, and birth control; and asking that the Federal Trade Commission protect the privacy of people looking for information about abortion.

The White House reiterated steps that it has already taken, in the two weeks since Roe fell, to protect abortion access. These include allowing federal workers to use paid sick leave to travel in order to receive abortion care, $3 million in funding to HHS-funded family planning clinics, the launch of a government website with accurate information about access to reproductive healthcare, and a reiteration of the military’s obligation to provide abortions to service members and their families “as permitted by federal law” — meaning “in the cases of rape, incest, or to protect the life of the mother.”

While it’s important that people have access to accurate information, reports and recommendations won’t bring abortion care to pregnant people in affected states. They need a way to get medication through the mail, or the money needed to travel, and until the U.S. has enough support for reproductive rights in the Senate to make abortion access the law of the whole land again, grassroots efforts like abortion funds may offer the best hope to those that are currently stranded.