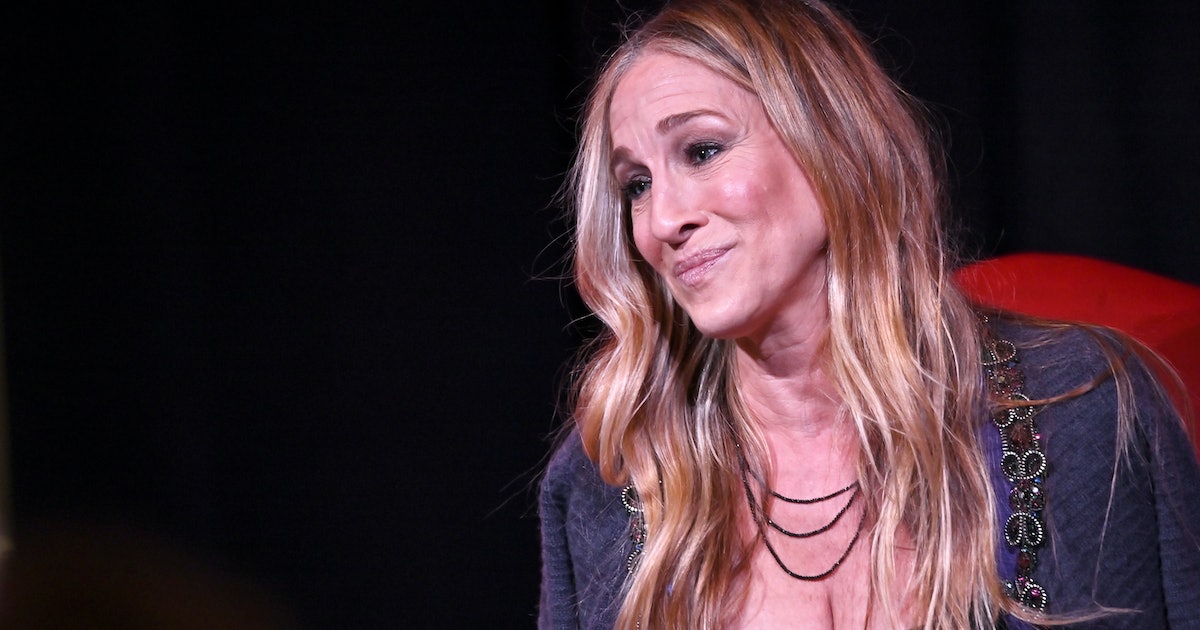 
Turns out that Sarah Jessica Parker just has that It Girl factor. During a recent interview, the And Just Like That… actor was informed that she had “herringbone highlights,” aka highlights on the crown woven around natural grays. When the actor learned that she had started said herringbone highlights trend, she made it clear it wasn’t a calculated look. “I can’t spend time getting base color every two weeks. Can’t do it. Nope. Too much,” she simply stated.

Many outlets have lauded Parker’s, along with other “older” celebrities — AKA famous women over the age of 35 — decision to just simply let their hair exist in all its gray glory as “brave.” But Parker doesn’t get why it’s such a big deal.

“It became months and months of conversation about how brave I am for having gray hair,” she recalled of the viral moment last summer in the new interview with Glamour. “I was like, Please, please applaud someone else’s courage on something!”

Parker also touched on how she was labeled “brave” for the And Just Like That… episode in which Carrie goes to a plastic surgeon and gets a glimpse of how she could look like she did “15 years ago” with the right procedures. But even if Parker could de-age herself 15 years with the snap of a finger, she wouldn’t do it.

“So you’d have that moment and then you’d immediately start aging again and 15 years later you’re in the same place,” she pondered.

“What’s the point? I just…don’t care enough. When I walk out the door, I want to feel okay—according to my standards. I can’t even tell you what those standards are. But you know how you feel when you feel most like yourself, whatever that means. I’m not without vanity. I guess I just don’t care enough about everybody else’s opinion.”

Really, she doesn’t see why she should be spending much time worrying about how she looks like she is aging (as people who age are wont to do).

“It’s not that I’m purposefully dismissive or delusional. But I don’t really ponder it. There’s been far more peripheral chatter about my time spent on earth than I’ve spent thinking about it myself.” Parker makes it clear that she still uses products and has hair colorist appointments, but she doesn’t see how or why it is a headline.

She also noted that media tends to label women with gray hair as brave but don’t even address men with gray hair. Parker noted that Andy Cohen, who “has a full head of beautiful gray hair,” was also photographed with her, but there were no headlines about his hairline.

“Some of it confounds me because of the double standard that is so plainly illustrated. It’s just not a great use of time, of ink, of anybody’s attention. We all need distractions, to take ourselves away from the headlines that are devastating, unthinkable. But is this the distraction we want? Or do you want to read a book or do a crossword puzzle or talk to a friend. I think we can do better,” she added.

Parker acknowledges that there is a spectrum of feelings and anxieties surrounding aging and physical appearance, and that she doesn’t “think there’s a right or a wrong way to have a relationship with aging, living, time spent on earth.”

“But mine is that there are a million things I want to do with my free time, and none of them have to do with preserving [what I look like] now or trying to get back to 15 years ago. All I think about is like, Where am I going to eat? What books am I gonna bring with me? Can we get into that strange little restaurant? Will the water be warm enough where I wanna swim? Also, Wordle.”

“We also need to reframe the word beauty. Sure, skin care is part of it. But what’s arresting and attractive to us is a person who is interesting, who’s going to tell you about a book they love or a village they visited. It’s never going to be about this,” she told Glamour, motioning to her face. “I meet women all the time and I’m like, ‘You are beautiful.’ I could stare at them a million years. But I guarantee it has nothing to do with whether they’re 18 or 78.”

Okay, so she might not be “brave,” but Sarah Jessica Parker is pretty damn cool.