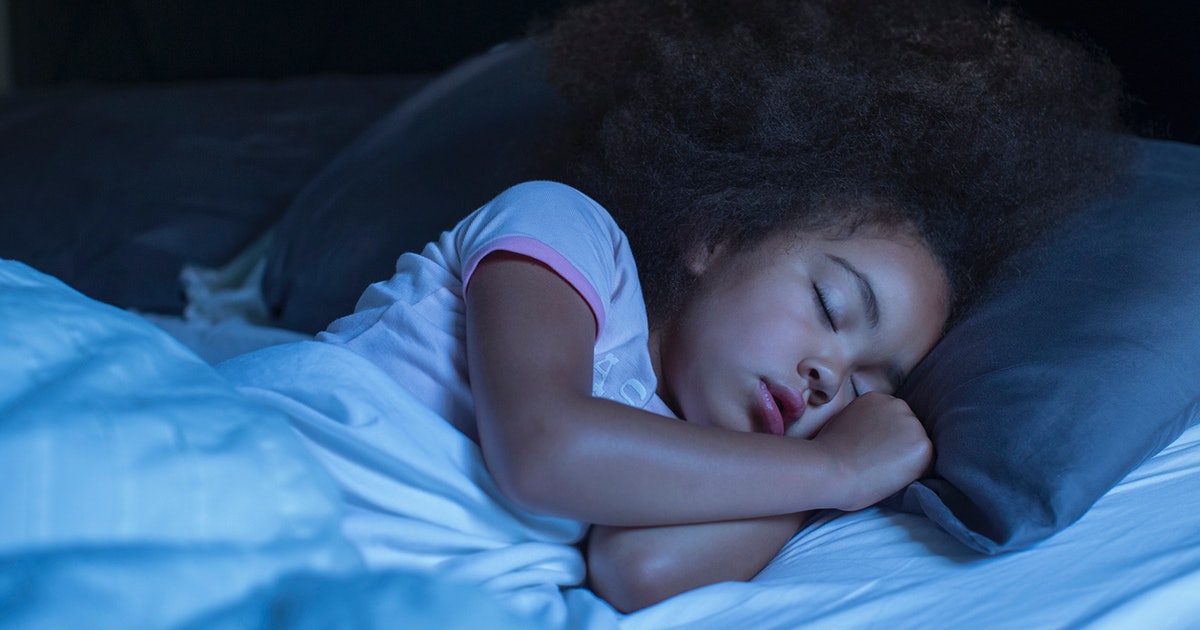 
It’s okay if your kid needs a bedwetting alarm. It may seem embarrassing, but it happens to a lot of kids — and, sometimes adults. Bedwetting, also known as nocturnal enuresis, is commonly seen in children five and under. But sometimes, bedwetting is a sign that something is medically wrong. For older children and adults, it may be an indication of urinary tract infections or sleep apnea. The topic of toddlers’ and kids’ sleep is, well, complicated.

RELATED: Toddler Sleep Training & OK-To-Wake Alarm Clocks To Help You — And Your Tot — Get More Zzzz’s

What is a bedwetting alarm?

In short, bedwetting alarms alert a toddler when they’re about to or are currently peeing on their beds. According to Certified Sleep Science Coach Stephen Light, when the sensors on the alarm detect moisture, it makes a sound, warning both the parents and the child. “By waking up the child to go to the bathroom, the alarm prevents additional moisture from seeping through the mattress, which could caused odors,” Light says. With a bedwetting alarm, kids can better notice the signs of bedtime urination and go into the bathroom before it’s too late!

At what age is bedwetting a problem?

Most children are fully potted trained by the time they’re 5-years-old, however, bedwetting often occurs for kids between the ages of 5 and 7. But remember, every child is different! There are also cases of bedwetting in older kiddos too. No matter what, it’s a problem that can be rectified — especially for young children. Bedwetting is often a learning process and a normal part of childhood development. One of the best things to do is to buy a bedwetting alarm. This will help alert a child when the bedwetting is happening, in hopes of waking them up and breaking the pattern.

What is the best bedwetting alarm to buy?

This all depends on your child. When shopping for a bedwetting alarm for your baby or toddler, Light mentions that the most important thing to consider is its invasiveness to the child’s sleep. “Some bedwetting alarms can be annoying and affect the child’s sleep quality. Although it might prevent wetting of the bed, it can cause your toddler to lose sleep,” he adds. And we know how grumpy our little ones can be after a bad night of sleep (I mean, same here) so it’s important to test out and know what works — and what doesn’t work — for your kiddo.

“With invasiveness heavily considered, I recommend TheraPee—a minimally invasive bedwetting alarm,” says Light. “Unlike the traditional clip-on bedwetting alarms, the sensors in this device are on a moisture detecting pad placed underneath the toddler like a mat. The unique design of this bedwetting alarm makes it an excellent option since it doesn’t disturb the child’s sleep.”

Is this system hilariously named? Why, yes it is. But, it works. This set-up includes online interactive software, which helps provide some therapy and answers when it comes to bedwetting. Perfect for kids between the ages of four and 18, parents swear by the TheraPee system.

One Reviewer Says: “As the parent of a 12-year-old that has never had one dry night, I have to say we are thrilled with the progress! We are coming to the end of our fourth week and have had TWELVE dry nights. We are amazed, my son included. If only we would have heard about Therapee sooner. We’ve tried restricting fluids after 6 PM, taking to the bathroom in the middle of the night, alarms, and medicine. Even titrating to a higher dose of medicine didn’t work. If you’re reading this, you know how devastating this can be for your child. Yes, this treatment is a bit pricey however, so are the countless Pull-Ups …well worth the investment!”

Surely you never thought that something like a bedwetting alarm could be cute. But alas, meet Chummie. Chummie may very well be your child’s new best friend. It’s a great system for deep sleepers, and uses 8 different selectable tones to help wake your child when an accident is starting. Chummie believes you’ll definitely see results in a few weeks of use. Chummie is also FSA and HSA eligible.

One Reviewer Says: “We have tried everything without success. He is scared of sleepovers because he doesn’t want his friends to know that he wets the bed at night. My son was losing confidence so I decided to take him to a pediatric urologist. He suggested an alarm but not a specific one. I started researching and asked around for suggestions. Then one of my co-workers recommended [buying] Chummie Bedwetting Alarm. This was the one and only alarm I have purchased for my son. It works great and my biggest regret is that I should have bought this sooner. My son followed the instruction faithfully. He has been using Chummie for almost 4 weeks. First week we had one incident, week two we had 3 incidents, and week 3 and 4 [have] been clear. My son is so happy and so am I.”

This bedside alarm is also a great choice for deep sleepers. It promises fast detection through its cotton mat sensor and is also very easy to use. The mat is also washable and will stay good through 300 washes. You can even adjust this system’s sensitivity level for extra support.

One Reviewer Says: “This is an amazing product, safe and easy to use. After years of trying everything else for my 14-year-old son who would wet the bed at least four nights a week. We tried all sorts of things like limiting fluid intake, and waking him up at night but nothing worked. We finally bought this alarm at the recommendation of his pediatrician. The doctor said that this particular alarm was a good one to have and we tried it as our last attempt. I am amazed to get the results so quickly. My son used this alarm for 15 days and he is no more bedwetting.”

The Wet-Stop 3 actually comes in both blue and green. The system includes reward charts, and a book download for parents to understand the issues behind bedwetting a little better. This is a great system for any child who benefits from having visuals to help mark their progress.

One Reviewer Says: “This is the best thing since sliced bread. For years we have tried to help our daughter break her nighttime bed wetting. We went to specialists and tried medications. Doctors told us not [to] try the alarm and she would outgrow it. Well, she is 10 almost 11 and this issue was hurting her confidence. She really wanted to try this alarm. After about 2 months with the alarm, she has stopped nighttime wetting and no longer wears the alarm. We are so elated and so wish we would have tried this alarm a lot sooner.”

The DryBuddyFlex is such a popular system that they keep making improvements on it. What sets this one apart is the fact that it’s wireless, making it less of a nuisance to include in a child’s bed. Since it’s not wearable, it also offers more comfort for kids so that they can get the sleep they need before an accident starts.

One Reviewer Says: “I am not exaggerating when I say the first three nights he was able to sleep all night completely DRY! I don’t know if it was psychological or what?!! [On] the fourth-fifth night he wet and sounded the alarm and we helped him wake up to use the bathroom. FROM THE SIXTH NIGHT ON HE HAS BEEN COMPLETELY DRY!!! Even waking himself up to use the bathroom around 4-5 a.m. on his own and using regular underwear!!!”

The Malem comes in a variety of colors (including camouflage!) which may make your child more excited about trying this wearable alarm. This one has been proven in clinical studies to curb bedwetting, with plenty of parents backing that up.

One Reviewer Says: “Simple to attach, and works well. It is loud enough to help my son get up at night to go pee even if it gets muffled by pillows or toys. Very easy to clean. The alarm is very accurate to the point of only needing one drop to set it off. This has been very helpful with our nighttime potty training.”

Looking for a bedwetting alarm that won’t break the bank? Then the Zest 4 is worth considering. It’s very small and lightweight, so your child won’t be embarrassed by a large system used to control the problem. It also states that you’ll start seeing the results between four and 12 weeks. By that time, your child will be trained to know the signs of having to urinate during the night. It’s a good unit for people who might be a bit hesitant on pulling the trigger on an alarm, and is relatively easy to use.

One Reviewer Says: “Some nights there were several accidents but after a couple of weeks the alarm was actually waking her up and she would use the restroom. Now finally she is no more wetting the bed and gets up on her own before she can even have small dribbling. Today I have a happy little girl this year who can sleep out at his friend’s house now. This was truly a life changer for her and my entire family!”

Looking for something completely different? Then the Rodger Wireless Bedwetting Alarm Kit may leave you intrigued. It comes with two sets of moisture-sensing briefs for your child to wear in bed. After putting them on, all you need to do to activate the system is snap on the bedwetting alarm transmitter and turn the receiver on. It couldn’t get easier than that. They also include a washable bed pad to make the bedwetting stage easier for parents.

One Reviewer Says: “This product worked even better than promised. I wish I would’ve ordered it for my child sooner. It was worth every penny, and I highly recommend!”

The DRYEASY has been a huge success for well over 3,000 parents who’ve given it a five-star rating on Amazon. One of the benefits of this brand is the fact that you have full control over the volume. Too loud? Not loud enough? It’s all on you. Aside from volume, you can also choose from six different sounds, so that it’ll wake up your child but not be too jarring on anyone.

One Reviewer Says: “Life-changing. My 6-year-old stopped wetting the bed after 3 weeks with this. I cannot believe it.”

This article was originally published on 4.22.2021