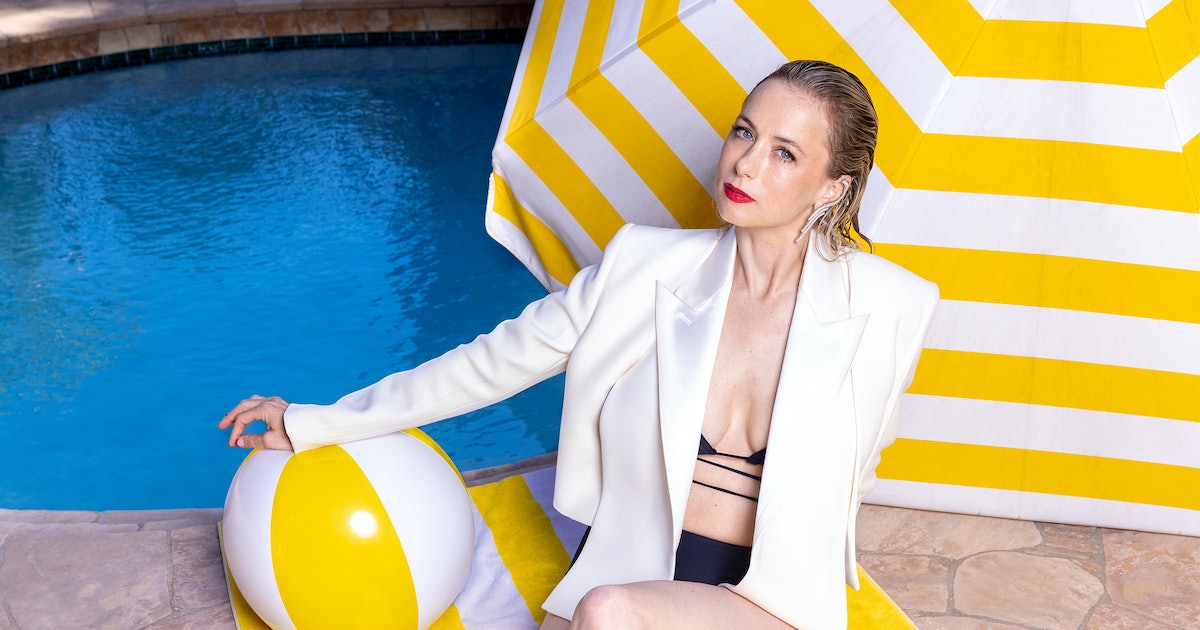 
So far, motherhood hasn’t turned out as Iliza Shlesinger expected. “I thought it would be more of a hang,” she says. “I thought we’d sit in my office and talk boys, but she’s sleeping the whole time.” I’m sitting on a breezy patio in the hills above Los Angeles with the comedian, actor, as of this year, mother of one. Shlesinger and her husband, chef and author Noah Galuten, had their first baby, Sierra Mae, in January, and Shlesinger is willing to admit that the little one is not thrilling company just yet. “We had a barbecue the other day, and she slept through the whole thing. I’m like, ‘Cool. Cool diva move,’” she says. The 39-year-old is currently on her Back in Action comedy tour and preparing her sixth Netflix special. Her second book, All Things Aside, will be released in the fall. We spent the morning talking about motherhood and why Shlesinger says “a little bit of grace and a conversation would go a long way.”

First kid is a big deal. Well, I guess they all are. How was the pregnancy?

I had a wonderful pregnancy. I know nobody wants to hear that. I had so much energy. I slept like a rock. I was like, “Should I piss people off and tell them that somehow I lost weight and got blonder?” I toured at seven months pregnant. I had all the energy. We worked out. I was afraid that I was going to give birth to a raisin because I soaked up all of her nutrients. We were hiking the day I decided to go into the hospital to induce. I was daring her. I’m like, “I’m going to go out to a remote trail. I dare you to put me in labor.” She didn’t.

You just kind of give yourself over to it. They’re like, “What’s your birth plan?” I’m like, “Whatever the baby wants to do.” That kid wants to come out of your nose, that’s what’s happening. [When it was time to be induced,] we went in, they put the Pitocin in, and you start feeling contractions. And then they said, “You’re only at 1 centimeter. We’re going to do something called a Foley balloon.” It felt like the most medieval, archaic torture device that you would use for a heretic in dark ages England. It’s a balloon that they insert into your cervix, and it dilates your cervix. Some women can handle it. And they gave me… What’s the thing that’s crippling our nation? That’s in cocaine? That’s lethal?

Yep. They give you fentanyl, a controlled medical amount. And I was like, “Great. Nothing better than a controlled medical high.” Then they put the balloon in. I lasted maybe six seconds. It hurt more than giving birth. They should use this to get secrets out of terrorists. I made them take it out, and she was like, “Well, this is going to take longer.” I was like, “We’ll take the scenic route! I will be here watching Cheer on Netflix. Let me know when I’m ready.”

[Finally], she was like, “You’re at 6 centimeters. Let’s have a baby.” I was so pumped. It was 75 minutes of pushing. I broke every blood vessel around my eyes. But I came for that moment where they put the baby on your chest. And she comes out, and she’s got these beautiful lips and she’s all squished and this dark hair and this little baby reptile cry. She’s on my chest. I’m like, “Who are you?” I cry thinking about it. I used to put my dog on my chest and pretend I just gave birth to her. I was like, “This will be great with a real baby someday.”

Can we talk about feeding?

I breastfed her for almost four months. I committed to whatever — every two hours, at night. And then I would go on the road. I had my own little system, but then the pump battery died while I was on the road. By the time I had gotten home, I was like, “Let’s just give it up.” I would’ve liked to have done longer, but it was a very special time.

But we also supplemented with formula. I think there’s this stigma around it. As if you are not a good mother if you give formula. I think almost all moms are using formula and they’re not talking about it. There’s no shame in saying “I breastfed and used formula” or “I didn’t breastfeed.” And also, who cares? Who has the time to think about judging how other mothers raise their children?

I debated talking about this, but I’m a very open book. I have a nanny full time. I’m not the kind of woman that’s going to read all the books. I won’t even read the instruction manual on a stroller. I decided to get a live-in, full-time nanny to check my work. Somebody that’s like “been there, done that” to put my mind at ease.

Motherhood is a new level of judgment, isn’t it?

I witnessed it when I was pregnant: the hysteria around consuming. You’ve got to get this stroller and this and everything has a weird word. Everything’s a bitby or a boppy or a blanky. I’m like, “What do we sound like?” with all these made up words for these Dutch products that you need to have. Just me crying on the ground, clutching a Nordic construction manual.

I am a competitive person. But when it comes to this, I have such a love for women. I think the hysteria just comes from loving your kids so much and you want to know you are doing it right. I’ve never felt more a “go with God” kind of thing. I don’t have the energy to judge it.

Is your husband getting up in the middle of the night, too?

No, the nurse does it. You can put this in there. We need to normalize however you choose to raise your child is fine. But the nurse comes out with her in the morning and I play with her all day. I have no problem changing a diaper. I think it’s gorgeous poop.

Has she tried real food yet?

We put some mashed potato on her tongue and she just kind of held her tongue out not sure what to do. Did I let her try a lemon? Yes. Was it mean? Yes. Did I really want to see her face? Yeah. Was it worth it? No.

Do you have advice for your future self?

When I was in high school, I was in the play Our Town by Thornton Wilder. There was this big lesson in it about how nobody realizes life as it’s happening. That stuck with me. I am not great at living in the moment. I am terrible at meditating. I try to be OK with the days that it’s quiet. I try to sit with myself. It’s the advice that everyone gives: Take more time. Live, laugh, love. Which is the most annoying platitude we see engraved on everything.

Before I had a kid, I was irritated when friends would send me unsolicited pictures of their children. Your best friend has a baby. OK, I want to see a picture. One. I made a promise to myself that I won’t be that person. Then I had the baby. I won’t go back on my word, but I’m sweating, biting my nails. I’ve got to send a picture of her! But I don’t.

Would you let your daughter watch your shows?

I think when you’re a woman and you do anything other than lie down and take it, that you’re considered edgy. I would let her watch it. Everything I said is honest. So you may not want to deal with it, but at least it’s honest. I think it’d be great if she just didn’t know what I did for a very long time. I deeply do not want her to be in show business.

If she was like, “I want to be a standup comic with every fiber of my being,” I’d say, “Great. Use your dad’s last name. You can come to me for advice. But I cannot give you help. Because people will take it away from you however they can. And you need to build this on your own.”

I want her to have the intelligence and the grace to move through life and deal with the maniacs. I want her to walk in a room with her head held high and feel like she belongs everywhere. I think L.A. is one of those places where there’s a lot of crazy people. I know what I’ve dealt with in my life, and I don’t want her to go through any of those pangs. I don’t want them to hurt my little pink baby.

You want to control whatever you can to give them the best opportunities to become the best version of herself. She wants to be a flamingo farmer, great. I will be there on day one with flamingo feed. But she has to work hard. And I think speaking Chinese would be a good thing.

My hope is that somebody through a hashtag saw my page and they’re like, “Yeah, I guess she’s got a point.” But for the most part, we are screaming into a void.

No, because nobody ever reads the full quote. Somebody will review this article. They’ll take the quote and then they’ll be like, “How can we hang her in the town square?” I’m always picking my words carefully because we don’t allow for nuance.

Because there are a billion people out there ready to tell you why what you’ve done is wrong. We have this obsession in our country with forcing women to have children. And yet when a woman does have a child, we’re convinced she has no idea what she’s doing. How is it that all these women have been having babies for thousands of years and yet no woman knows what she’s doing?

When I was pregnant, it’s like, “You need this product. You have to have this salve and this blah.” I practiced having blinders on. I don’t want any advice. I don’t want any of your products. Your body does know what it’s doing. I may not know what every cry means — but I’m connected to her. And companies would like to take that away from you and replace it with doubt so that you buy all their products. You think about women who don’t have access to the resources that a lot of us do, they figure it out. And they did it without the baby Zoc 3000.

There’s a video that went viral of this woman — an Olympic skier. She took her little baby all bundled up and she dropped him into a little snowbank. It was very funny because it was so much snow and the kid was smiling. And she got so much hate. First of all, this woman is a skier — her world is snow. So she knows exactly that’s powder. She’s not dropping him into an ice bath. And yet somehow, we’ve decided we know better. Let women govern their own bodies and raise their own children. Is she hitting the kid? Is she feeding them gasoline? No? She’s probably doing OK then.

I always try to give my example as something that everyone can say yes to. So we can all agree that’s bad. Right? For the most part. Unless you’re the CEO of Exxon Mobil.

This interview has been lightly edited and condensed for clarity.