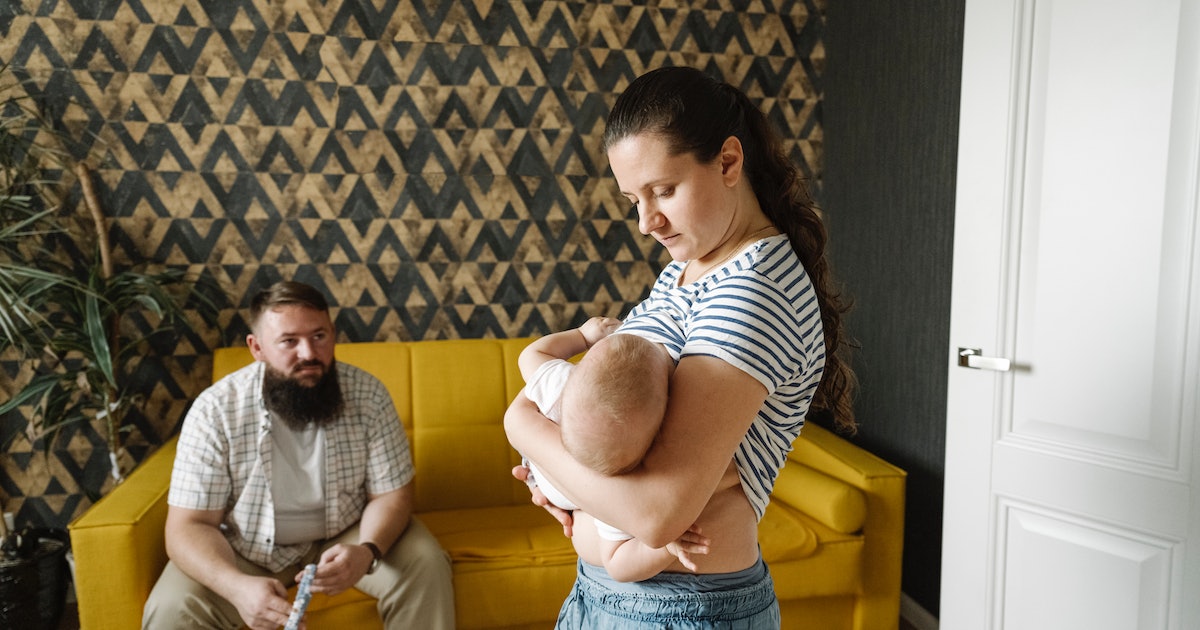 
Get ready to be mad. Reddit’s AITA is a place where people often ask about predicaments that don’t seem to be so clear cut. On Sunday, though, a 23-year-old pregnant woman took to the subreddit and asked something that had an immediate, clear answer: you’re right and your husband is being an a-hole.

“So I (23F) am pregnant and getting close to my due date. My husband (24M) and I are going over labor and recovery now. His family [mother, father, brother] are coming to visit on their way to vacation. He knows I want to try and breastfeed and he said his one “rule” is to not BF in front of his family,” the OP said.

So, to be clear, the to-be father is asking his wife not to breastfeed in front of his family.

Easy enough, some might think. Plus, having to “step away to feed the baby” is always a great excuse to leave any potential awkward conversations with the in-laws.

Still, the fact that the husband is already telling his wife where she can and cannot breastfeed in her own home is enough for many to write off the hubby as the clear jerk

“He says he doesn’t want me to make his dad and bro uncomfortable and that I should go upstairs to feed our baby every time, every 1-3 hours.” The OP’s husband said he would join her for those upstairs feeding sessions to bond with the baby, which seems like a nice gesture — and that’s being generous, considering what the OP wrote next.

“My problem is I will be in recovery and am supposed to rest so stairs happening that often seems like a problem to me. I told him it’s about my recovery and bonding to baby and his family can just leave the room or just NOT LOOK if they’re uncomfortable. I said I would wear a cover, SOMETIMES, but I need to be able to see because I’ll still be learning.”

Yeah. You don’t even need to look in the comments to know that the young dad-to-be is not only wrong, but in for a rough ride as a dad if his wife breastfeeding where she and the baby are comfortable and safe is causing this much of a conflict.

“What I want to know is where the hell husband gets off telling his wife he has a RULE for her breastfeeding,” one said very succinctly.

“She should tell him that HER rule is she can breastfeed wherever/however she wants, but BIL and FIL have to put covers over their heads while she does it,” said another brilliant Redditor.

The comments overwhelmingly supported the poster and her desire to breastfeed wherever she wants in her own home. Many suggested that she just stay upstairs and avoid the visit altogether if it is that big of a deal to her partner.

“If OP doesn’t feel like doing stairs, then just stay upstairs and let people bring her food/drinks etc. If not well enough for stairs, I cannot imagine wanting to sit downstairs for hours and visit with family/friends,” suggested one user, rightfully noting that being bright-eyed and bushy-tailed for in-laws after recovering from giving birth isn’t usually the top priority.

Others agreed, saying that the bigger issue is that the husband expects his wife to entertain after giving birth.

“No new mother needs houseguests immediately after bringing a newborn home. You would feel like you have to “entertain” them, make sure they have meals, etc. They are seldom any actual “help” to the new mother and usually create more work for the new mother. They need to wait a few weeks before coming to visit,” added one user.

Or another commenter had a great way to solve the problem: “Simple solution… his family goes upstairs if they are that uncomfortable.”

It’s pretty clear that the husband has some growing up to do. The OP didn’t say that the husband’s family mentioned being uncomfortable — it seems like he just assumed they would be. And even if he had a squeamish family, it seems like he can’t work up the nerve to explain that his wife cannot move a lot and needs to recover. Or that breastfeeding is a normal and natural thing that has nothing to do with sexual nudity.

One Redditor summed it all up perfectly: “If you don’t want to see me in my natural state don’t come to my natural habitat.”

Breastfeed wherever the hell you want in your homes, y’all.