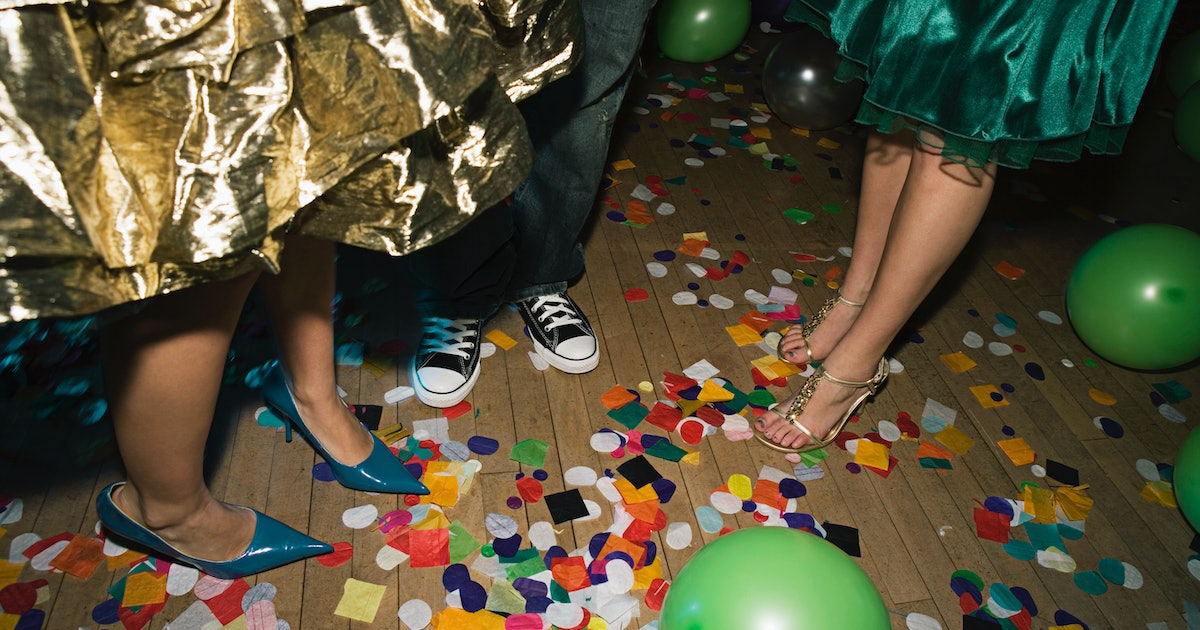 
My daughter had her first dance the other night. The invitation said “formal attire,” which meant mini dresses and Air Jordan high tops. She got her hair blown out at a local salon, a treat in our house for special occasions, and spent the afternoon getting dressed at her friend’s house and eating sushi. When I picked them up at the end of the night, they were filled with sugar and the manic energy particular to teenagers, celebrating my daughter’s win in the dance contest. Her victory was not attributed to any particular skillfulness, rather her willingness to dance alone encouraging others to join her. At first, I was picturing my beloved child lonely and at sea on an empty dance floor, the DJ’s spotlight directly on her solo figure in the middle of the gym, but then I took a minute to remember the first dance I ever went to, a Sadie-Hawkins-style dance that was a fundraiser for our local hospital.

The tradition in my town was that in the fall of 9th grade, all the kids from the surrounding area got dressed up in formalwear and descended on the local Marriott ballroom to boogie the night away. I was at a new school that year and just getting settled in, so it was kind of awkward finding a date. In the end, my two friends and I asked three sophomores and went as a group.

My mom took me shopping for a dress in the basement of our local department store. I was fresh off soccer practice, sweaty in my sports bra, but determined to find a dress that truly felt like my style. My older sister had been convinced to wear a chic (but frankly weird) dress to her St. Vincent’s dance and I was committed to making sure I didn’t face the same fate.

In the end I found an off-the-shoulder, long sleeved dress in stretchy velvet that was honestly the most comfortable dress I have ever worn, before or since. I paired it with velvet ballet slippers, a little pearl necklace, brushed my hair and I was good to go. In the days before TikTok, Instagram, and YouTube, we were absolutely clueless about makeup and blow outs — maybe I had a swipe of mascara on my lashes and a bit of borrowed lipstick from my mom.

My friends and our dates posed for photos in someone’s living room and then piled into a rented limousine for the drive to the dance where we took some surreptitious swigs of Goldschläger in the parking lot of the hotel. The rest of the night is a blur of strobe lights and taffeta, my excitement and nerves all wrapped into one. Kids I hadn’t seen since they ate their boogers in kindergarten were now in tuxedos and formal gowns with acne and lipstick.

One part of the evening is seared into my memory. For context, I have, what we call in my family, “shit brown” eyes. They are totally ordinary; no one would write a sonnet about my eyes. They don’t glitter like the sea or have depths like the night sky or softness like the forest moss — they are just plain, old brown. Except, God bless Van Morrison (before he became a troubling character), who wrote a song called “Brown Eyed Girl,” which for a girl like me was just about as good as I could hope for.

The DJ started playing “Brown Eyed Girl,” my song as I considered it, and I squealed with excitement, jumping up in the air and running toward the dance floor, only to find the two boys I had crushes on (neither of whom was my date) standing next to each other talking. I looked at them both and said: “I love this song. This song is about me. One of you needs to dance with me.”

I was convinced the rest of my life was about to begin. One of them would put his arm around my velvety waist, whisk me onto the parquet wood floor in the center of the ballroom and make my dreams come true. In reality, they looked at each other, then at me and both shook their heads with similar rueful smiles. They had, in unison, declined my enthusiastic offer to dance.

Here’s the funny thing. I know I was disappointed because I remember looking back and forth at each of them incredulously, asking “Really? Neither of you is going to dance with me?” and then cajoling them a bit with a fervent “C’mon guys. It’s my favorite song!” But when it became clear they weren’t going to budge, I went to dance to “Brown Eyed Girl” on my own. Perhaps I found a circle of friends to join, or maybe I just twirled by myself in my black velvet dress. I honestly don’t remember. I just remember that it didn’t break me. I had asked and been rejected, but I was fine. Better than fine. It was a perfectly magical night of adolescent awkwardness.

So to all of you with kids heading out to proms and school dances this spring, with your hearts in your throats that it might not be a fairytale ending for them, I just want you to picture a 14-year-old me: a brown-eyed girl, duded up in an awesome (and comfortable) dress asking not one, but both boys I liked, to dance with me, and being turned down. And it was fine.

If you’re worried about your kid’s heart being broken or their being rejected by someone they like, just remember: there is so much more life to be lived. It will hurt for a minute or a week, but they will survive. I have lived to tell the tale and better yet, I have lived to joyfully dance through many, many more nights.

Vanessa Kroll Bennett is the co-host of The Puberty Podcast; the founder of Dynamo Girl, a company using sports and puberty education to empower kids; and the author of the Uncertain Parenting Newsletter, musings on raising adolescents. You can follow her on Instagram @vanessakrollbennett.