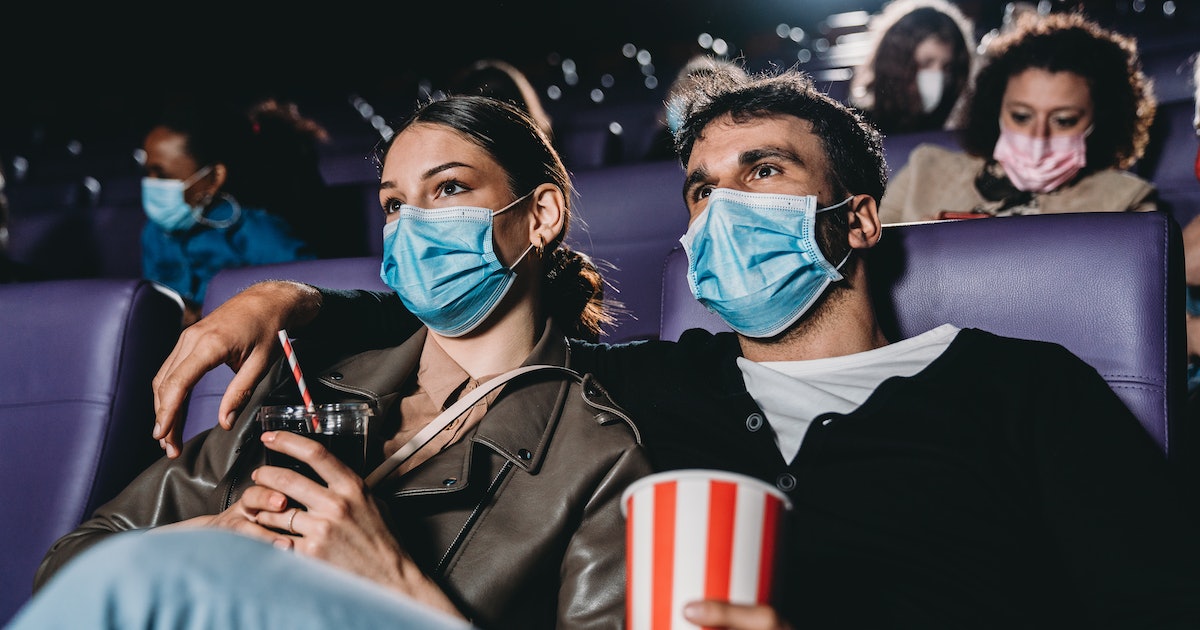 
For lots of people, going out and doing regular social activities like catching dinner and a movie still (understandably) feels risky in the midst of the pandemic, and especially so as another wave hits us head on. Still, many are trying to maintain some sense of normalcy, even if it means making some adjustments for safety and comfort.

One man took to the Am I The Asshole subreddit to ask if his take on the new normal made him the jerk.

“We went to the movies last night. There were still multiple empty seats throughout the theater and a few clusters of empty ones, and where we sat (just right of center) seemed ok,” the user noted.

“My wife is 7 1/2 months pregnant and was hesitant to go to the theater for such a popular movie during Covid, but really loves Marvel so I tried to make it comfortable for her. We purposely went on a week night to avoid crowding.” So far, all makes sense.

“When I booked the tickets I saw that someone had already skipped a seat on one side of us, so I purchased a 3rd seat on the other side to give her a bit of breathing room,” he said, noting that tickets for this theater were assigned seating.

“About halfway through the previews, the next group over from us arrived and one of the guys just sat down directly next to her instead. I figured he probably didn’t pay attention to his ticket, so I politely told him we had purchased that seat and asked him to move to his assigned one (one seat over).”

Again, makes sense! We’ve all been there, especially when trying to find a seat number in a dimly lit theater. But, of course, the man who took the empty seat also took issue with this request.

At first, the guy said he would “move when they got there,” assuming that someone was still coming for the seat. After the husband explained to the man why he bought the extra seat and that no one would be sitting there, the guy lost it.

“He got really annoyed and told me it was an AH move to buy a seat you don’t plan to use because we were “forcing” him to sit in his own seat, a few feet to the right, which was not as good of a view? The screen is like 80 feet. You can see it well from everywhere. His friends joined in mumbling about what AHs we were, but eventually slid down one.”

“I did switch with my wife and she sat on the other side of me, but at this point i was just upset that I had preplanned something to try to make her comfortable, spent money on it, and then this random person felt entitled to stop all over that,” the original poster concluded.

The comments section was full of support for the husband, confirming that he was very much not the a-hole in this situation, considering he spent the money on the ticket and wasn’t just blocking it off. Many even shared that they also have bought “buffer seats,” even before the pandemic.

Others were also quick to point out that the dude just plopped in the seat, and even when he thought that someone else would eventually take it, he would just, you know, keep it warm until then.

“Uummm no dude, if the seat is taken it doesn’t matter when the person sitting there arrives. Besides, wouldn’t that be the worse situation? You wait until last moment and then start looking for a place to sit? Thus bothering other people? What’s wrong with people like him?” said one commenter, who also confirmed the OP was NTA.

And unfortunately, this seems to be a common conundrum at the movies.

“I saw something similar at my local theater this weekend and it always blows my mind. ‘It doesn’t matter where you sit.’ Yes, yes it really does matter, or they wouldn’t ask you to select your seats buddy,” commented one user.

Another user, who works at a movie theater, confirmed this trend of entitlement with seating.

“I work at a movie theater and this shit happens all the time. We actually just did away with the COVID procedures that required us to space out the seating. This is totally normal. He was being a jerk for questioning why he needed to move to his own seat and out of yours. Next time, get an employee though so there is no hassle,” they said.

Ultimately, the OP was just being extra thoughtful and making sure his pregnant wife felt comfortable in a public setting. Let’s not guilt people for the precautions they take during the very real and ongoing pandemic — especially pregnant or immunocompromised people — deal? Deal.