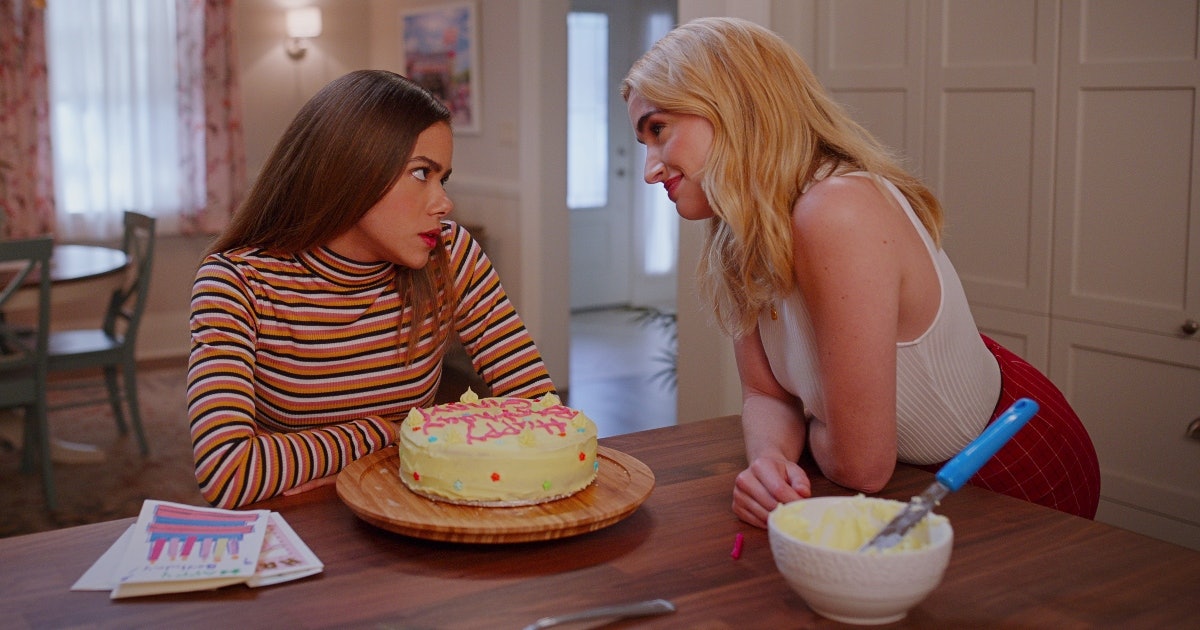 
The first season of Ginny and Georgia ended with enough cliffhangers to fuel at least five seasons’ worth of story, so we are beyond grateful that Netflix renewed the mother-daughter dramedy for a Season 2. As it stands, the last viewers saw of Ginny, she was driving off into the night on a stolen motorcycle with her little brother, Austin, after discovering her mother, Georgia, murdered their stepfather. Meanwhile, Georgia was disposing of ashes belonging to her dead ex via fireworks while also being proposed to by the town’s Mayor Paul. With so many twists and turns packed into the finale’s final moments, Ginny and Georgia Season 2 has plenty of questions that need to be answered ASAP.

Happily, the series seems to have found a passionate fanbase despite a bit of controversy courtesy of an ill-advised joke at Taylor Swift’s expense (never anger a Swiftie, Netflix). As of September 2021, Ginny and Georgia was Netflix’s 10th most popular series ever after garnering a total of 381 million viewing hours. Those stellar ratings led Netflix to officially pick up the series for a second season in April, just two months after its premiere on the streamer.

That’s not bad for a show that initially looked like a Gilmore Girls clone. Instead of taking the easy route and copying the cozy feel of Stars Hollow, the writers wisely gave Wellsbury an edge to set it apart from the classic WB show. While Lorelai and Rory dealt with their share of family and romance drama, the Gilmores never had to take on weighty topics like murder, domestic violence, and racism. Meanwhile, Ginny and Georgia face all of those things and so much more on the regular.

Since the show was officially renewed, there hasn’t been much news about what’s next for the dynamic mother-daughter duo, but with filming on the new season beginning soon that’s bound to change. For now, read on for everything we know about Ginny and Georgia Season 2 so far.

When does Ginny and Georgia Season 2 premiere?

Netflix hasn’t announced an official premiere date for Season 2 just yet, but it will most likely land on the streamer sometime in late 2022. Thanks to star Scott Porter’s Instagram feed, we know that filming for the sophomore season began on Nov. 29. Per What’s on Netflix, production on the second season is set to run through April 2022. So, as long as there aren’t any delays in filming, it seems safe to estimate viewers will be able to return to Wellsbury sometime in the fall of 2022.

That’s still a long way off, but just knowing the cast and crew are heading back to work should sustain eager fans for now. After all, the Ginny and Georgia team is social media savvy, so you can always follow their progress via the show’s official Instagram.

Who is in the Ginny and Georgia Season 2 cast?

At this early stage, it’s too soon for any official casting announcements. However, it appears all of the primary cast members will be returning for Season 2, including Antonia Gentry as Ginny, Brianne Howey as Georgia, Felix Mallard as Marcus, Scott Porter as Paul, Sara Waisglass as Maxine, Raymond Ablack as Joe, Jennifer Robertson as Ellen, and Diesel La Torraca as Austin.

Additionally, it seems likely viewers will once again be seeing Ginny’s dad Zion, played by Nathan Mitchell, since she appeared to be heading to his apartment in Boston at the end of Season 1, according to Gentry. In a March interview with TVLine, the actor explained, “I don’t know if you notice, but when she’s packing her bag, she grabs the book that Zion gives her, and if you were paying attention, when Zion arrives and is giving her the book, you know that he included an address. He has that secret coded message in it, and she finds out that it’s his address to his Boston apartment. So I’m thinking it’s pretty reasonable to assume that Ginny might be headed toward Zion.”

As for new characters, nothing has been confirmed, but thanks to Ginny mailing Austin’s letters to his dad, it sounds like another one of Georgia’s exes will be heading to Wellsbury soon.

Are there any spoilers for Ginny and Georgia Season 2?

Since filming is just getting underway, spoilers for Season 2 are scarce, but Howey did offer up a few hints at what’s to come during a recent interview with Us Weekly. The actor shared that she has seen the Season 2 scripts and things are about to “get dark.”

Meanwhile, she’ll also have to balance being in the spotlight as the mayor’s fiancée, and she might just end up discovering a few skeletons in the seemingly perfect Paul’s closet. “I think with Paul, where she’s at right now, it’s a lot of power,” Howey told Us Weekly. “She and Paul actually have a lot in common that I think nobody assumed at first, but Paul’s power-hungry too.”

Porter, who plays Paul, has hinted at his character’s duality surfacing as well. “As far as Mayor Paul goes, I have had questions since day one about where he came from because of the things that he says in the show,” Porter told HollywoodLife. “He went to Brown. He has an Ivy League education, and then he abandoned all of it to travel overseas, backpack, teach English, and get a sense of the world that is much different than a lot of people who try and fast track their way into politics. But then, upon his return to the States, he magically did that. What drives a person like that? He’s multifaceted, yet very direct and focused. So what made him that way? I’m really excited to discover more about his family and where he came from.”

As for Ginny, she took a scorched earth approach to her sudden Wellsbury exit, so she’s going to have some major decisions to make after she returns home.

First and foremost, is she willing to put in the work to repair her friendship with MANG after their big blowup, or is she going to move on to another group of friends entirely? For her part, Gentry hopes Season 2 will see Ginny channeling her inner Georgia. “I want to see Ginny get down and dirty,” she said in a March interview with Elle. “I want to see her turn into Georgia a little bit. I want to see her really dig in and show that mean streak I know she has. That would be really fun to explore.”

But when it comes to Season 2, the plot isn’t the only thing that’s taking a turn. Gentry also spoke about a major shift in Ginny’s fashion that reflects the character’s development. “Think total 180 — I’ll just leave it at that,” she told Us. Gentry also told Seventeen that, “For season 2, the stakes are much higher now — obviously — than we left off with season 1. So, I think fans will be in for a lot of wonderful tension, a lot of building up to climax, and a couple of interesting characters will be revealed.”

If Gentry gets her wish, Ginny and Georgia Season 2 might just end up being even more intense than the already nail-biting Season 1, and we are so ready for the drama to come.